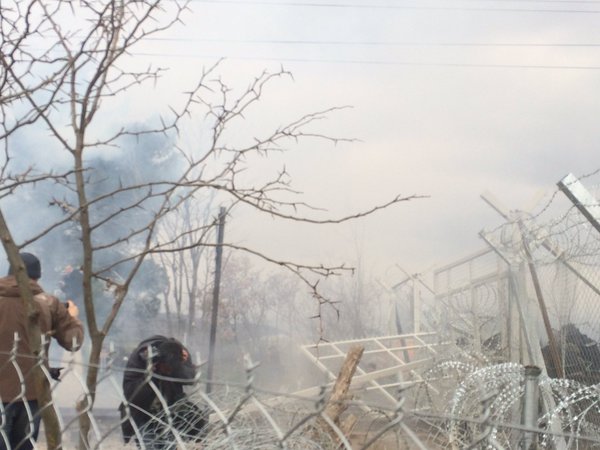 Consider for a minute the “invasion” these leaders are moving against. Figures show 34% of refugees are children, thousands of them unaccompanied. Another 20% are women. The vast majority of these people are families fleeing conflict. Just under half are Syrians escaping Islamic extremism themselves. The refugee influx amounts to less than 0.5% of the European population. This was never an unmanageable problem for the EU: it is an issue only for nation states. But resorting to nationalist fixes is a cheap solution.

Macedonian police just teargassed us. NOT on the air – directly to #refugeesGr !!! Loads of children teargassed ! pic.twitter.com/pglDn9n68h

Those finding comfort in virulent leaders are set for a huge surprise. The formal declaration of Europe failing to respond collectively to this crisis is about to cause a huge backlash to EU institutions. And the degradation of a system of institutions, no matter how ineffective and despised they may have become, will reverberate into homes.

Nationalist hostility between states will mean decades of stable diplomatic relations deteriorate. The slowdown of economic activity throughout the continent will impact on pay packets too. When other problems strike, EU partners won’t be a stabilising factor to resort to. Mistrust and dishonesty are going to spread like a disease.

“open the border” “we are humans, not animals” #idomeni pic.twitter.com/NJUf2zitBW

We have reached the point of no return without a plan. Greece cannot go on like this: mostly due to the fact that a sequence of political developments has brought its ineffective government to the largely unwanted place of defending the 1951 Refugee Convention in its desperation for a European solution for the arriving refugees.

European values ​​lie on the rails of #Idomeni. #refugeesGr pic.twitter.com/8sRVljWksQ

The UN high commissioner for refugees, visiting Athens this week, committed the UNHCR to increasing its involvement in reception operations in cooperation with the Greek government. He has to deliver on this as soon as possible. The European commission should do the only thing it does well: pick up the bill. It has a lot to lose if it doesn’t.

Dangerous & illegal use of teargas by Macedonia border guard. Fired directly at refugees in #Idomeni, via @ajplus https://t.co/tCsY4exYCv

Furthermore, a UN humanitarian evacuation plan (from Turkey and Greece) reaching beyond the EU should be put in place immediately. If EU technocrats and state leaders won’t do it in Brussels there is another way. Last week Portugal offered to resettle refugees from Greece.

It is now lightly raining in #Idomeni. 7000 in the camp (acc MSF), more arriving. Tents are set closer to the border pic.twitter.com/0STyTUPZq8

Democratic communities can do what states have failed to achieve by reacting to the real crisis Europe is facing today: the racist and nationalist backlash throughout the continent. There are a lot of people out there who remember well that the failure of Europe has been blamed on the weak in the past and where this leads. We will fight against it.

Boundary walls and fences in Europe | via The Economist 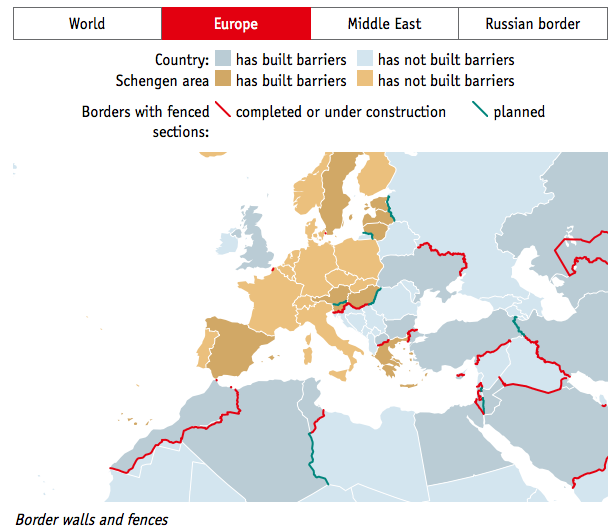