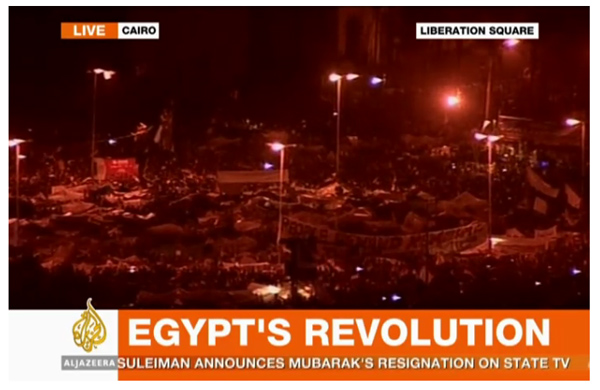 “Unbelievable!! He’s gone! Scenes of jubilations in #Tahrir. I will never forget this moment.”
(Sharif Kouddous)

“Peopke jumping up and down. Everyone hugging. We did it. I wanna cry from happiness.”
(Sandmonkey)

“Egypt: we just made history! #jan25! Power to the peaceful!”
(Rowan El Shimi)

“An Egyptian activist weeps on Al-Jazeera: “I never thought I’d live to see this moment.” I defy you not to be moved by this revolution”
(OwenJones84)

“History … this is what we are living today.. history. Our future has forever changed”
(Dima Khatib)

“Yes, social media played a role in #jan25. But don’t call this the Twitter or FB revolution. Real people protested and died. It’s theirs.”
(Andy Carvin)

“I can’t describe my emotions right now. I wish you were all with us celebrating in Tahrir.”
(Mosa’ab Elshamy)

“Lift your head up, You’re an Egyptian!”
(Omar Robert Hamilton)